First featured on the Laurel Mercantile Co. Journal, March 4, 2018.
“He wondered whether home was a thing that happened to a place after a while, or if it was something that you found in the end, if you simply walked and waited and willed it long enough.”
― Neil Gaiman, American Gods
Used to be, that when I thought of ‘home’, the first thing that came to mind was the place I grew up.  I was raised in the county, outside Laurel proper, on a hundred acres of lapsed cattle farm.  My earliest memories are of time spent combing the woods for hideouts, or flowers, or wild animals I could turn into pets (I was rarely successful with that, but I tried).  Home to me was both freedom and safety — I could be a wild thing all day, as long as I was home in time for supper.
My views changed as I grew.  With all the self-righteousness that a teenager could muster, I made the decision that I would never again live here — I was going to have a career in a city where there were “things to do”.  I went to college, went to work, and married a man who’d never visited Laurel until he met me.
All those years, I felt a pull — a little reminder of that free feeling that can only come from a place of true safety.  A whisper that we weren’t ‘home’ yet.
In December of 2016, I finally answered the pull, and Cory and I moved to Laurel, where we opened Guild and Gentry.  Through mutual friends, we met Josh Nowell, who owned an apartment downtown that we lived in while we launched the business.
All the while, we looked at houses.  We desperately wanted a home here; the community had embraced us, the store had been well received, and we were aching to put down roots.
We looked at houses for nearly a year, and nothing spoke “home” to us.  Enter Erin, Ben, and Home Town.
Our friends and family had been trying to convince us to contact the show for the majority of the time that we’d lived in the apartment, but we were hesitant.  The idea of giving someone free reign with your home (and your money) is terrifying.  We knew Erin and Ben were incredibly talented, but as self-professed “control enthusiasts”, Cory and I struggled with letting go of such a weighty series of decisions.
We finally reached our breaking point with house shopping several months into our time in Laurel.  We decided to look for the third time at a house that had been for sale for a while; although it wasn’t our dream house by any means, it had a few redeeming features and we thought we could live there a few years while we looked for something better.  The afternoon of our appointment, we arrived to a dark, locked house.  A call to the owner revealed that the house had sold the day prior, and she had lost my phone number and didn’t know how to contact us to let us know.
That sealed it for us.  We talked it over and decided that reaching out to the show would, at best, find us a place to live, and at least, we’d be no worse off than we were then, standing on the porch of that dark house.
We applied, and, a few weeks later, found ourselves meeting the Napiers for “Real Estate Day” — the day that we would see the two houses they’d chosen as good fits for us.  The first house they showed us was lovely.  As you saw last night, it was cozy, it checked off most of our list of “wants”, and that backyard space could have been amazing in their hands.  What you didn’t see was the reaction in my mind when they showed us the second house.
My heart stopped, just for a second.
I knew that house, because I’d always loved it.  It was on my family’s drive to church, so I’d passed it at least six times a week for over a decade of my life.
The house had some rough patches, sure, but I knew that it had the potential to be gorgeous.  To be home for us.
We left the Napiers, and I told Cory about my feelings on the Ratcliff house.  He didn’t know my history with the house, but he’d felt the same way about it.  We made the decision immediately and set up a time to meet with Erin and Ben later in the week.
A few days later, while having lunch with my mom and stepdad, a friend of my mom’s stopped at our table to speak.  Rebecca Patrick and my mom went to college together, and after the usual pleasantries, Rebecca asked where we were living since we’d moved back, because her father’s house had gone on the market.
Rebecca went on to tell us about how she wished someone would choose it for Home Town, because Erin and Ben met through her yearbook class at Jones County Junior College, and she would love to see what they did with the place.  Having already made my decision about the Ratcliff house, I wasn’t really interested, but asked anyway — where was her father’s house?
As Rebecca gave me the directions, I had the strangest feeling.  I don’t know if you’re a believer in the good Lord, but I am, and I felt His hand right about then.  Her maiden name was Ratcliff, and the house she was describing was the house that Erin and Ben had shown us, the house that I’d loved for years — the house Cory and I had decided would be our home.
That conversation, combined with a million other subtle nudges, thoroughly and finally changed my mind about letting go of the process.  The rest, as they say, is history. 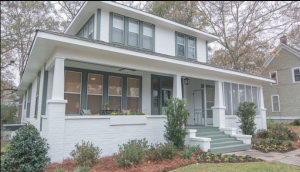 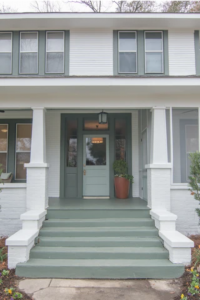 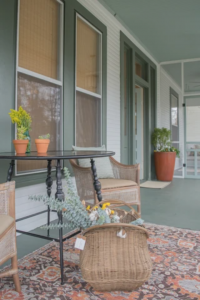 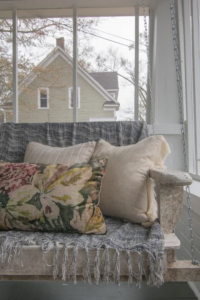 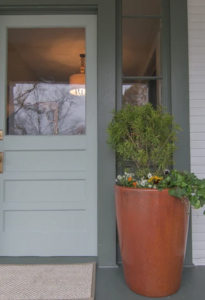 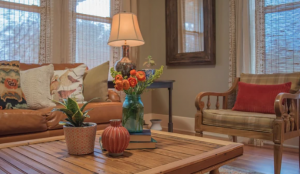 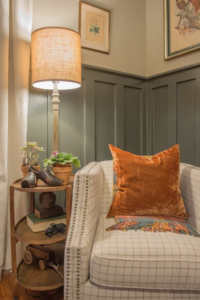 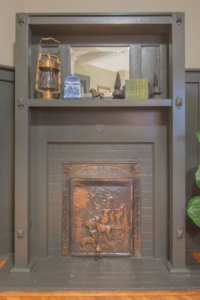 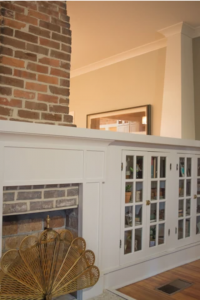 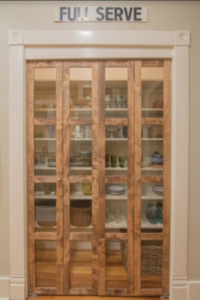 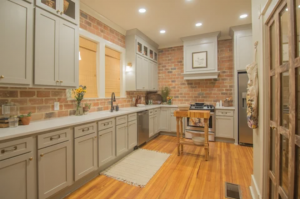 It’s HGTV policy that homeowners don’t get to see their episode until it airs, so we watched our home’s renovation right alongside the rest of America last night.  It’s a surreal feeling, sitting in a house while watching it on TV.  Watching them find the chimney, and the board with the house’s “birthday” on it, I got a little misty.  In a way, I wish we could have been here to see those moments in person, but having them captured on film means that we’ll have them forever.
Working with Erin and Ben and the team of craftsmen, artists, and makers they bring together was far removed from my initial fears about letting virtual strangers design our home.  Because I know everyone wonders — Erin and Ben are exactly who you see on TV.  They’re goofy and funny and earnestly genuine people who fiercely love our little town and want to see it grow.  They made an effort to get to know us, found out what mattered to us, and used their respective gifts to make this house our home.  They listened, about everything from our appreciation of exposed wood and brick to our ideal floor plan, and teased out details we love but would never have foreseen.  The detail at the side of the stairs remains one of my favorite parts of the house because of it’s unexpected beauty, and I don’t think Cory and I will ever become numb to the view from the living room door into the kitchen.
The Ratcliff house — now the Burks house — is a blessing I don’t think we’ll ever get over.  We were able to include Rebecca and her brothers in the process; you probably saw Erin’s post with Rebecca the night of our reveal.  The Ratcliffs all came to visit, and gifted us with a drawing of their own — a print of the sketch that Roy, the oldest of the brothers, did of the house when he was in high school.
We’ve finally gotten moved in and settled in our new house.  It doesn’t look exactly like it did when Erin designed it, because we live here, and life is messy.  It may not have turned out exactly as we expected, and our journey home definitely didn’t go as planned, but as you saw in the show, it’s the things that you don’t expect and don’t see coming that make all the difference in the end.
Thanks to Erin and Ben, this place is truly ours.  It’s our center, our place of safety to return to after days in the wild.
We’re glad to be home.
https://guildandgentry.com/wp-content/uploads/2021/04/Screen-Shot-2021-04-23-at-5.41.40-PM.png 662 1152 Guild & Gentry https://guildandgentry.com/wp-content/uploads/2017/01/gg-logo-simple-05-2.png Guild & Gentry2021-04-26 08:51:502021-04-26 09:00:54HGTV Home Town | The Burks House