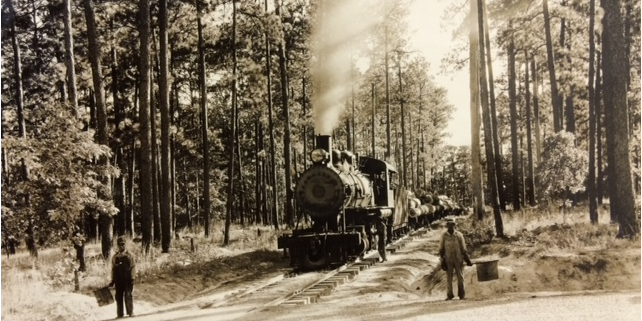 A foundation is built up so the track won’t flood.

Ballast is laid, as a measure to reduce fires.

Huge wooden beams, soaked in creosote against the spring rains, are spaced across the foundation.

Thin, I-shaped steel rails are laid perpendicular to the beams at exactly four feet, eight and one half inches apart.

These are held in place by steel spikes, hammered into the beams.

Then comes the train.

Long before Laurel was named or formed, the Southern railroads were being laid in earnest.

Railways proved the most economical means of conveyance for people and goods, but rival rail companies, fierce competition, and the Civil War had wreaked havoc on the country’s ability to adhere to a single national standard track gauge. Railroad tracks varied across states, effectively blocking efficient movement from place to place. This distinction was handy in war time, when the goal was to keep the enemy from bringing men and artillery into specific territories, but it tended to slow or prohibit commerce during the relative peace following the war.

Track gauge was the measurement between the interior faces of each load-bearing rail. Different track gauges essentially meant that the tracks were built for wheels set at different widths under the car they supported. Most Southern tracks were set to accommodate wheels roughly three feet from one another, while those farther North pushed the width out to four feet or more. In 1871, twenty three different track gauges were recorded in the continental US.  For transcontinental loads — like the lumber that Laurel eventually processed and sent north — locomotion was costly and difficult.

This issue was typically solved in one of two ways. Either companies paid to outfit their cars with adjustable axles — meaning they could be cranked in and out on each car to fit the gauge of the track the train needed to travel — or the cars were elevated and the axles and wheels swapped out to the needed size. Neither option was cheap or efficient, and both required extra manpower each time a train crossed into a new gauge.

Change was required, on a scale heretofore unheard of.

The process began with the Illinois Central Railroad Company. Seeing their profits diminish as delays and interchanges stacked up, they began the laborious process of changing all their tracks to a standard gauge. This began a domino effect, with the Mobile and Ohio, Cincinnati Southern, and other large rail operations preparing to follow suit.

Recognizing an industry-wide problem, the railroad barons banded together to create a solution to the gauge discrepancies. Over a period of years, plans were formed to refit thousands of miles of Southern states’ tracks to match those of the Northern railways. The vast majority of the offending tracks would be moved just three inches to fall in line with the industry standard.

Tens of hundreds of men uprooted and replanted thousands of miles of railway in one of the greatest engineering feats of their time.

It was done in a single day. 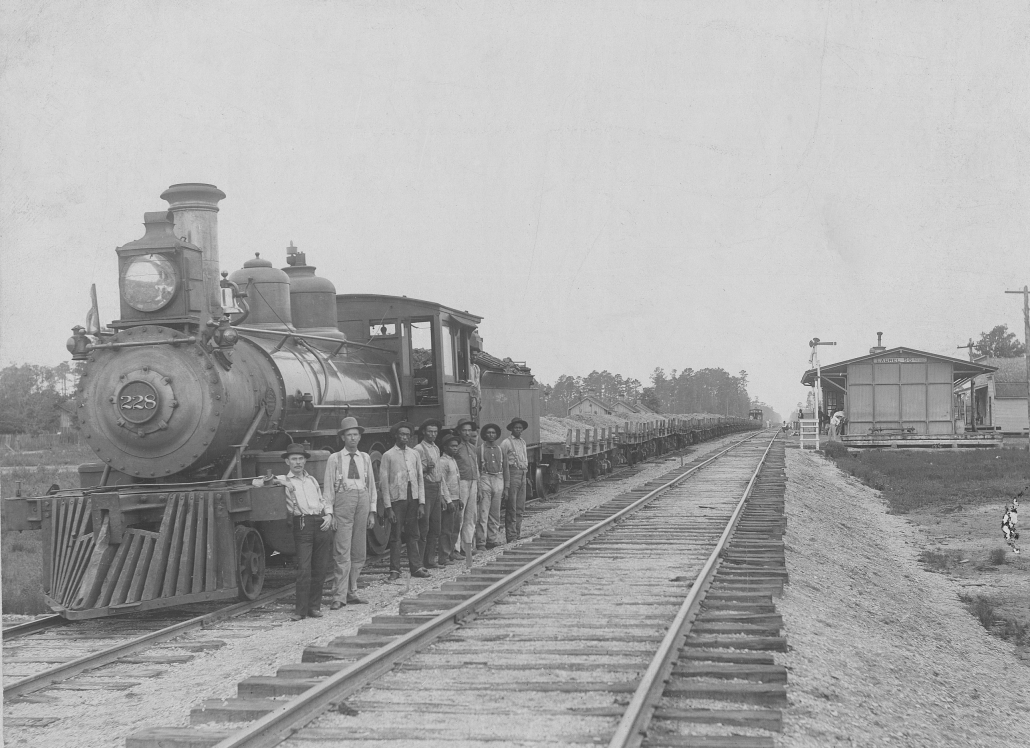 But what did that mean for Laurel?

Both the Illinois Central and Mobile and Ohio rail lines ran through our area prior to the massive refitting, but the increased efficiency of the standardized rail lines laid the groundwork for the lumber boom to come. Laurel sat in the crossroads of the two lines, able to send lumber south, to both the Ports of New Orleans and Mobile, or north, to the lumber-hungry cities of the Northeast and Midwest. Refitting the rails set the stage for Laurel’s debut as a yellow pine powerhouse.

The day the gauges changed, the future of Laurel changed with them.