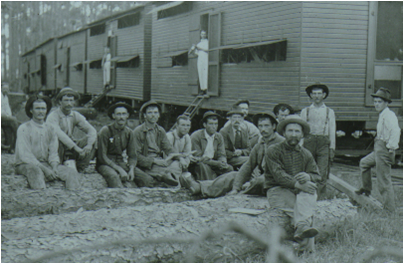 Lumber camps were not hospitable places.

Camps had the reputation for being chaotic and dangerous. According to the Atlantic Monthly, a popular periodical of the time, it was a common saying that there were always three crews in action at any moment — “…one coming, one going, and one at work.” The general tumult was furthered by the fact that only the workers lived there, and without the critical assessment of their wives or, for the most part, the mill owners, the men drank, gambled, and brawled to their hearts’ content.

The camps were all, at their most common denominator, temporary. Although Eastman Gardiner was on the forefront of lumber milling technology, production operated in such a way that workers were forced to move every few weeks in order to reach the next stand of pine for clearcutting. Railroad tracks were laid as the woods were cut, and heavy equipment, loads of lumber, and railway cars for the workers’ bunks traveled constantly towards the next grove of trees.

The trees were felled, and then towed to trucks, or large carts on the tracks, to be towed down the line back to the mill. The implementation of the skidder, a huge piece of equipment that used a combination of steam power and horses, meant that they could quickly crank in massive logs via cables, to be loaded onto the waiting railway truck using a steam-powered crane. This sped production considerably, which further kept workers on the move. They ate, slept, and toiled beneath the pines for as long as the work held out. They supported, but, by necessity, left behind, wives, children, and extended family — the camp had no place for them.

Eastman Gardiner realized that for workers, these migratory lives with no family connections left men untethered — they were inefficient, prone to violence, and unreliable. After all, the mill owners themselves recognized the absolute importance of family; upon their arrival in Laurel, finding themselves far from home and bound only by their mutual work, our Iowa men quickly made the decision to move their wives and children to the Piney Woods. As they proved again and again, the well being of the community as a whole was their priority.

The problem they faced, though, was how to move women and children into such a transitory environment without affecting the progress of clearcutting. The additional bodies meant additional lodging; traditionally in lumber camps, railway cars were outfitted with rows of bunks, and workers were assigned to a car and a bed. While efficient, this arrangement didn’t lend itself to mixed company. In some places, women and children followed their men into the woods, living in virtual shantytowns along the tracks, but this, too presented issues. Quality of life was low, and the families had to move and rebuild every time production progressed.

The solution came in an unexpected form — manufactured housing.

While the idea of manufactured housing wasn’t exactly novel, its application in the lumber industry was. Eastman Gardiner began to produce small, prefabricated pine components that, on site, could be easily assembled to form private homes for the workers and their families. They removed the boxcars formerly used for workers’ bunks, replacing them with the housing units along the tracks.

These homes were completely mobile as well. During construction, holes were drilled in the top and bottom of the unit. On moving day, a steel cable was run through the top and bottom beams, and the steam loader simply picked up the entire unit and placed it on the tracks. Production moved ahead, with everyone in tow.

Once constructed, the units themselves were roughly eighteen feet by six feet, and every worker received between two and six units in which to house his family. When allocated, they received a fresh coat of red paint and a place along the tracks. Workers and their families weren’t asked to pay rent until 1910, when the company began charging $1.50 per unit per month to cover loading, unloading, and transportation costs for the movable mill town. 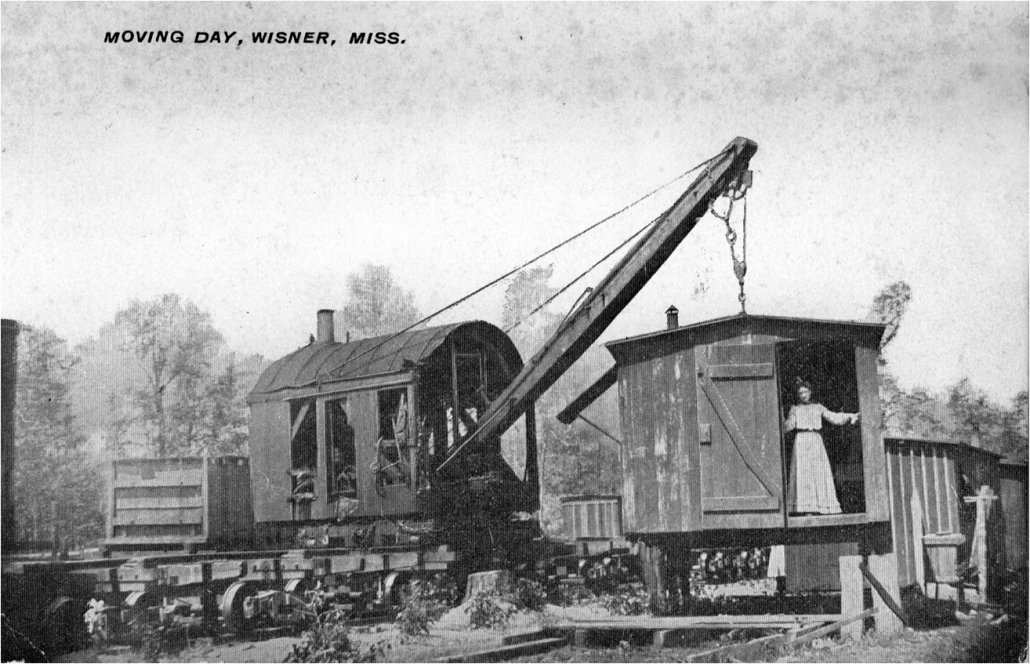 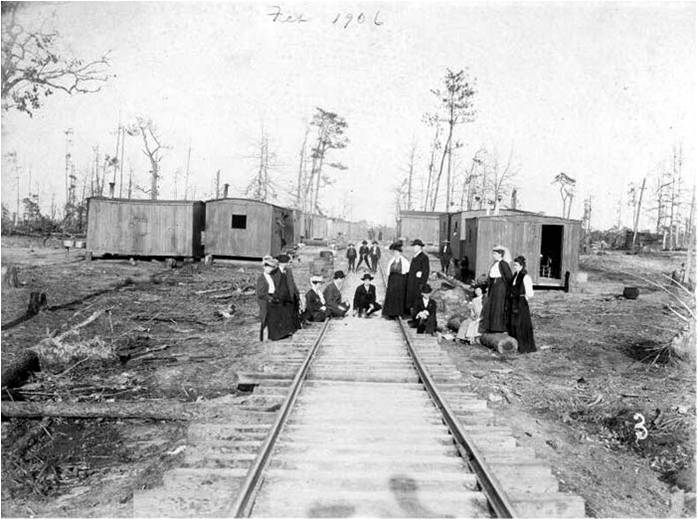 As one might imagine, this arrangement drastically changed the environment of the lumber camps. Not only did production improve, but the chaos of the male-driven camp gave way to a more orderly, community-centric atmosphere. In every camp, the routine elements of community life were established; Eastman Gardiner had each camp incorporated as a town under Mississippi law, and men were elected as aldermen and superintendents, to govern the camps from within. The company’s Cohay camp was one of the largest and best examples of the family-oriented camps. It boasted two schools, a hospital, and a Y.M.C.A. that residents used for both secular and religious purposes — all housed in portable units and placed on the tracks on moving day.

Lumber camp life was traditionally viewed as temporary — a temporary job, a temporary town built around that job, and temporary bosses who would eventually leave to return to their homes up North. Eastman Gardiner didn’t want their workers viewing their lives as temporary. Our Iowa men meant to stay, and put down roots, so they wanted their workers to experience the same sense of establishment.

By folding community and family life into the unruliness of the traditionally male-dominated lumber camps, Eastman Gardiner gave their workers a home, albeit one on wheels, and created a completely different way of doing business.